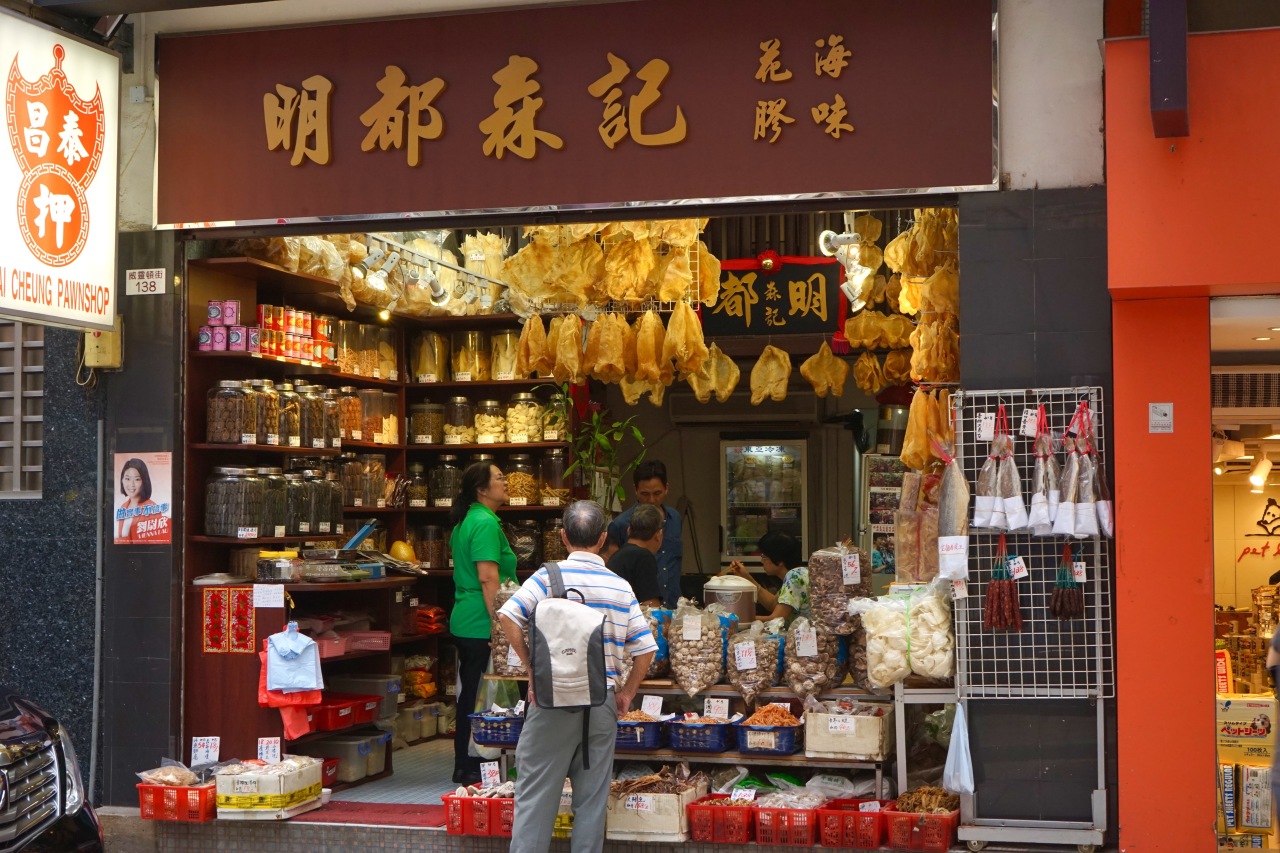 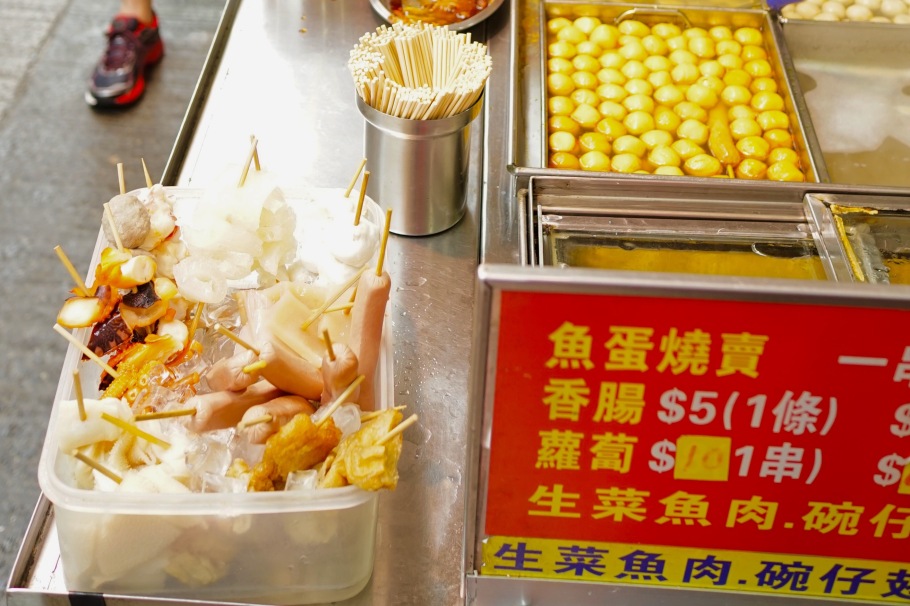 My husband has frequently travelled to Hong Kong and Mainland China for his work.  He finally got to show me why he loves Hong Kong.  We returned from my first visit a few days ago.

I didn’t have much of a preconceived notion about Hong Kong, except that I had heard wonderful things.

Everyone says the shopping is incredible, but INCREDIBLE is an understatement.  I have never seen anything like it.  I am sure there are bargains to be had, but the stores I most especially noticed were Cartier, Tiffany & Co., Bulgari, Chanel, Gucci, Prada, Stella McCartney, Chloé, Burberry, Louis Vuitton, Fendi, Miu Miu, Christian Louboutin… and they seemed to be everywhere!  There were also upscale department stores.

This isn’t the kind of shopping I just referred to, but I thought you would enjoy the photo.  Notice the man on the far right, he has a toothpick and a cigarette in his mouth and he’s talking on the phone! 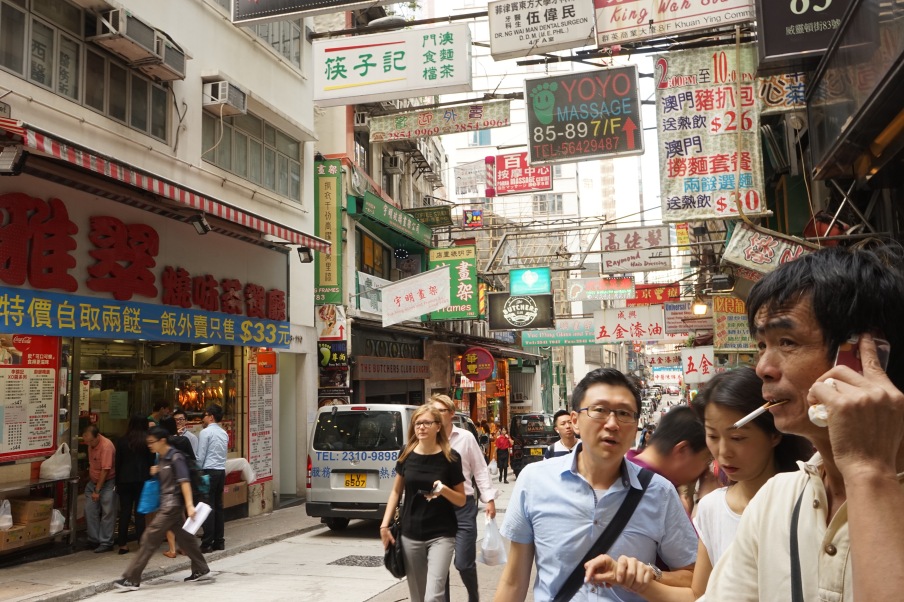 We were told to visit the Hong Kong Museum of History on our first day, so we would have a better appreciation and understanding of the city. 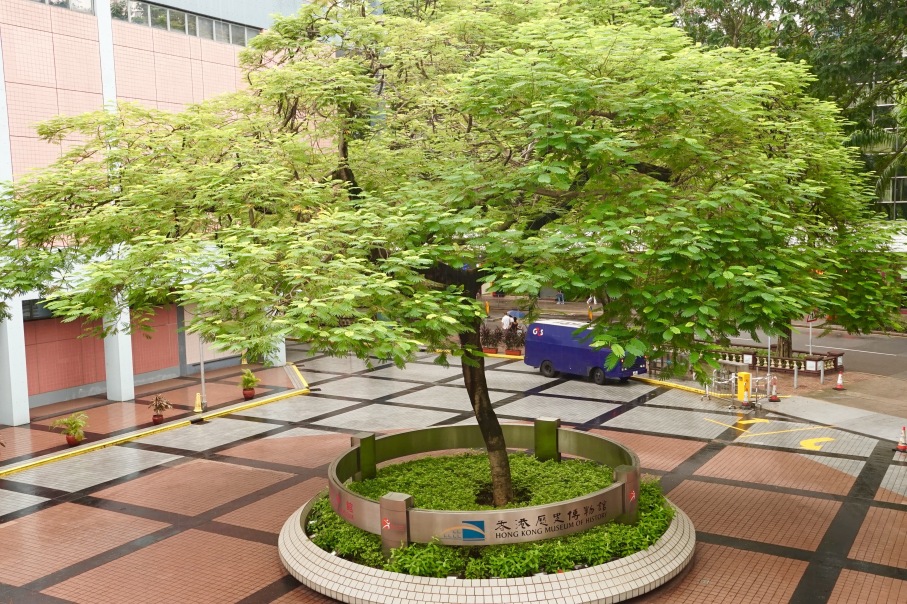 We could have spent a full day in the museum.  It covered everything from the ancient rock formations, to cave men, to wars, to modern-day Hong Kong and so much in between.  I have always thought of Chinese people as hard-working, dedicated, intelligent and resilient.  I assumed those admirable traits were developed out of the necessity to survive and desire to thrive.

I had no idea the people of Hong Kong have endured hardship in relatively recent times, starting with the Japanese occupation in 1941.  The Shek Kip Mei fire in 1953 left 53,000 people homeless.  In the 1960s, there were two severe droughts and two deadly typhoons, the second typhoon left 72,000 homeless.

I also didn’t realize that people from Hong Kong don’t seem to call themselves Chinese.  I am not sure how they say it, they may say they are “Hong Kong”.

Bride and Groom posing outside of the Peninsula Hotel in Kowloon

I made a new girlfriend on the plane ride to Hong Kong, her name is Eliza aka: Pui King.  I asked her about cultural differences between the U.S. and her country.  She told me Chinese people never give clocks as gifts.  Clocks signify that one’s time is running out, which is like an omen of death.

The night after we met Eliza, we went to dinner with a friend of my husband’s.  My husband brought a beautiful bottle of aged scotch to give to his friend for a gift.  It was in a bag and when my husband handed him the bag, I said, “We bought a clock for you!”  He politely smiled.  I quickly told him I was joking, but I think it took him a minute to shake it off.

A friend told us to go to one of the restaurants at the top of this building on the island of Kowloon to watch the light show on Hong Kong’s waterfront buildings. 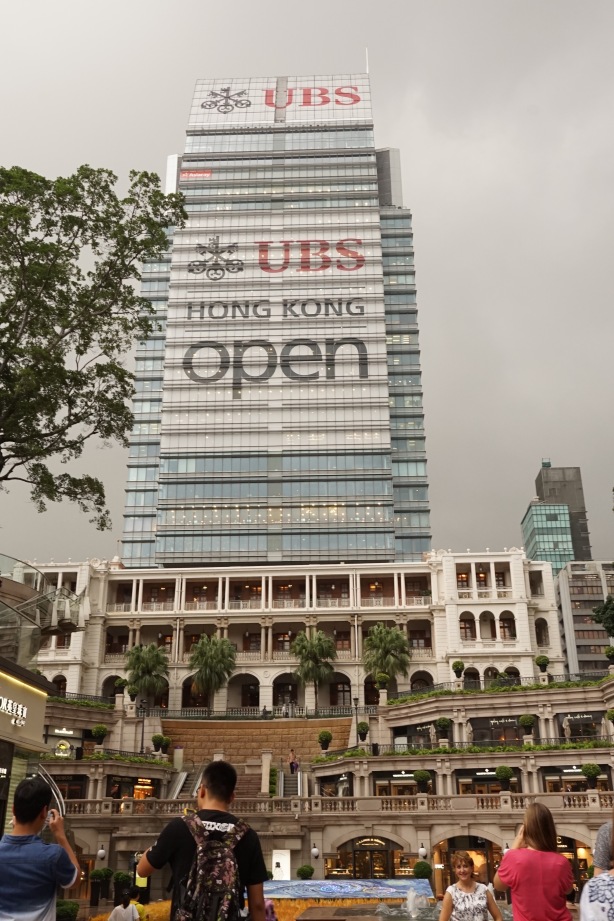 This is the view from inside the restaurant 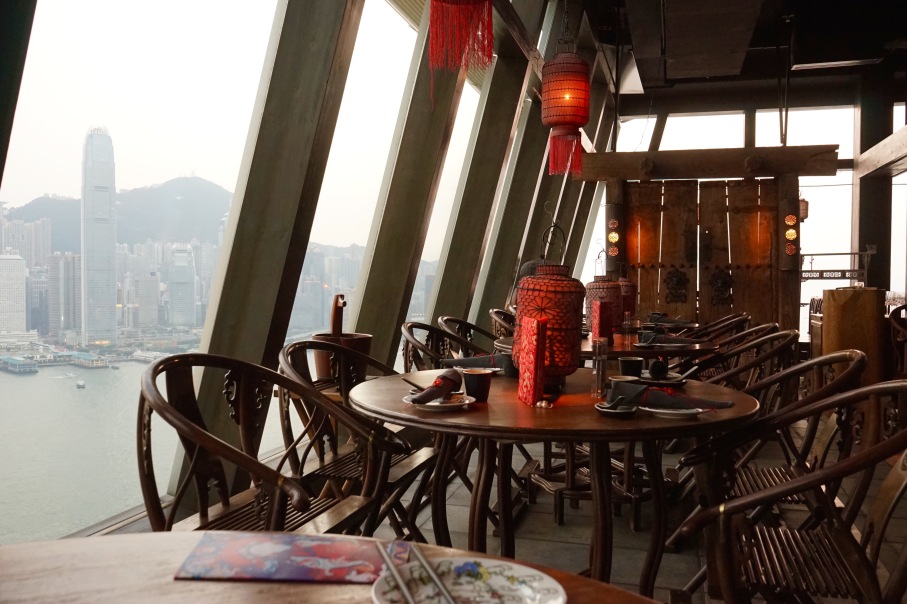 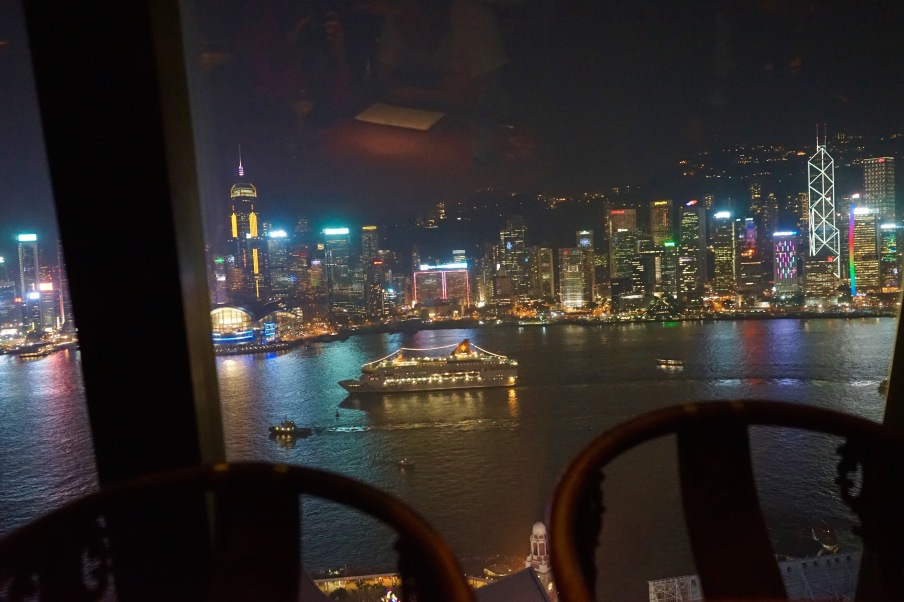 We did not order from the preset menu below, but I thought it was pretty.  The dollar amount on the menu is in Hong Kong dollars, not American dollars! 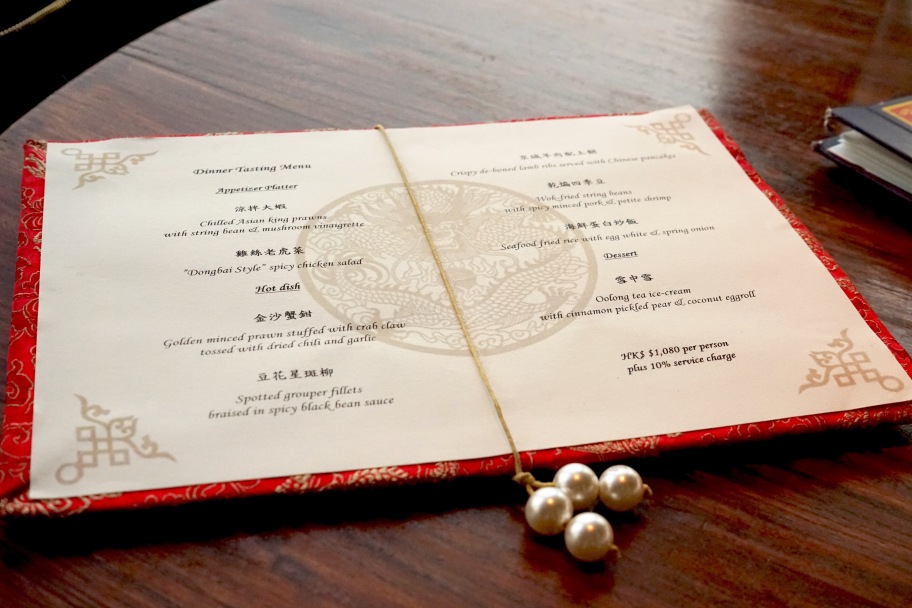 A foggy view from Harbor City Shopping Mall in Kowloon.  I am fascinated by the mountain peeks that jut out of the China Sea, barely visible through the fog. 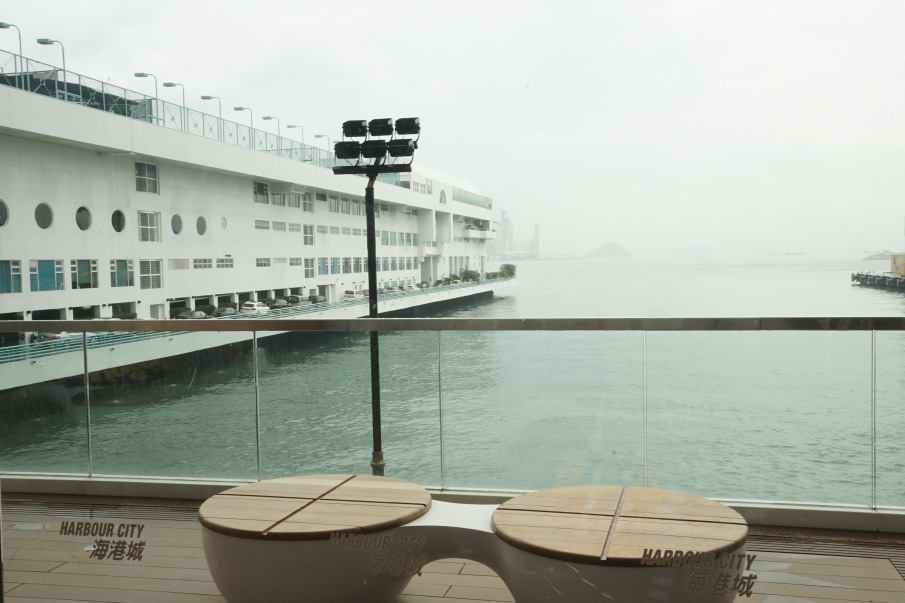 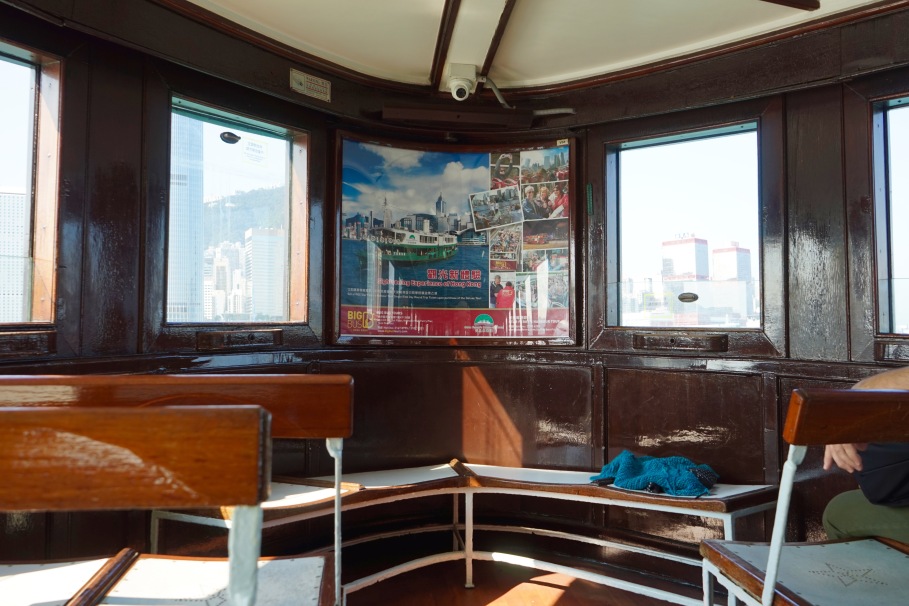 Another view of the ferry and my International Scarf 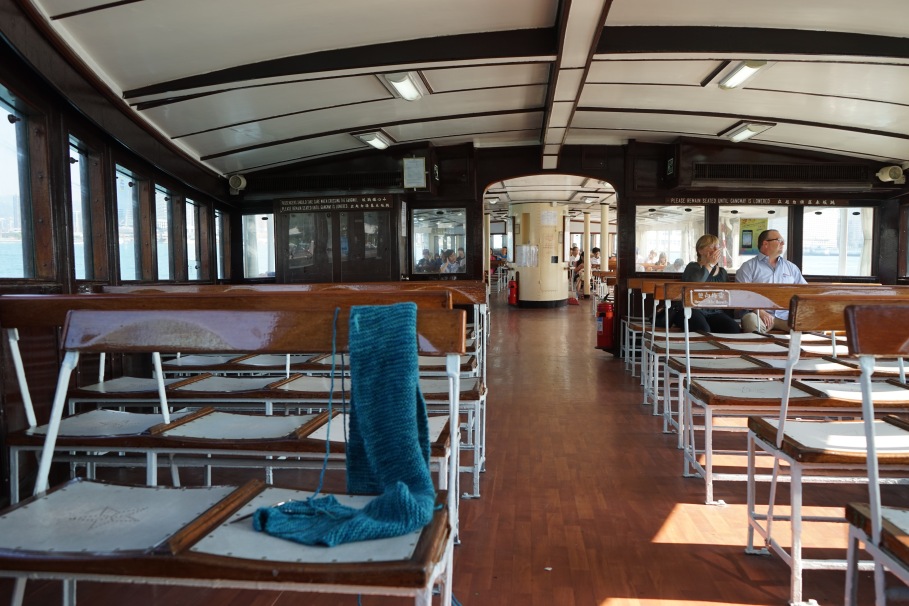 Kowloon school girls, in the MTR, waiting for their train after school 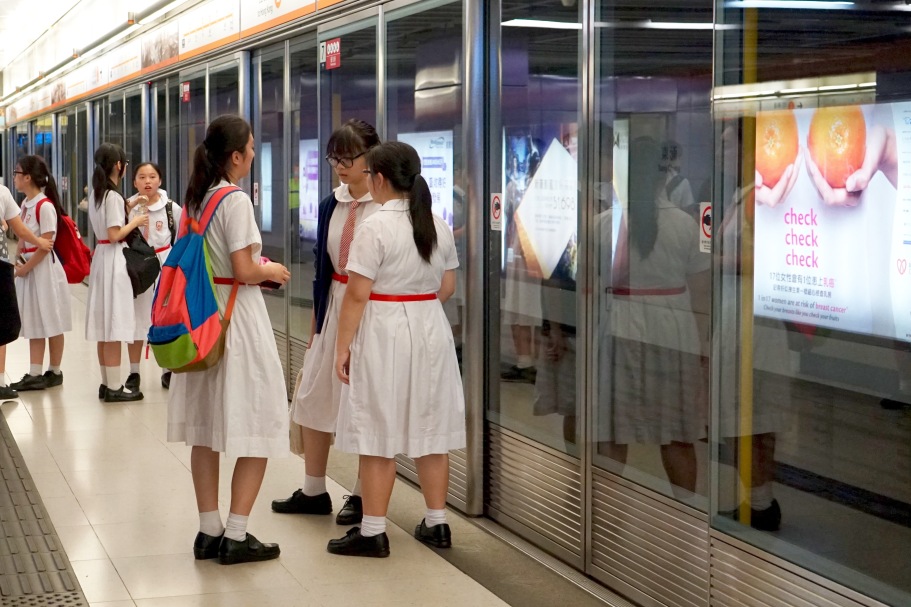 The Cupping Room’s award winning cappuccino in the Central district of Hong Kong, so wonderfully perfect! 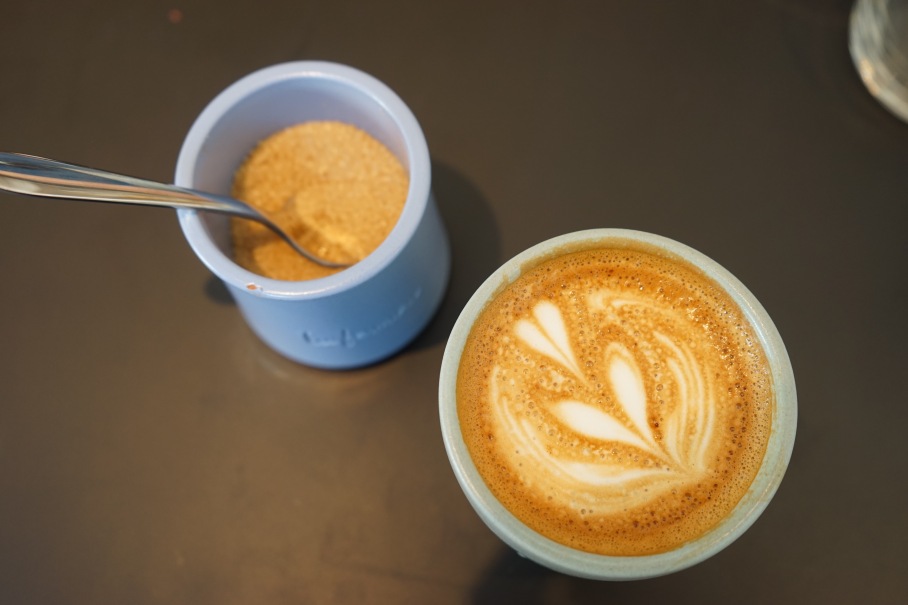 I couldn’t believe my eyes when I saw this scaffolding! 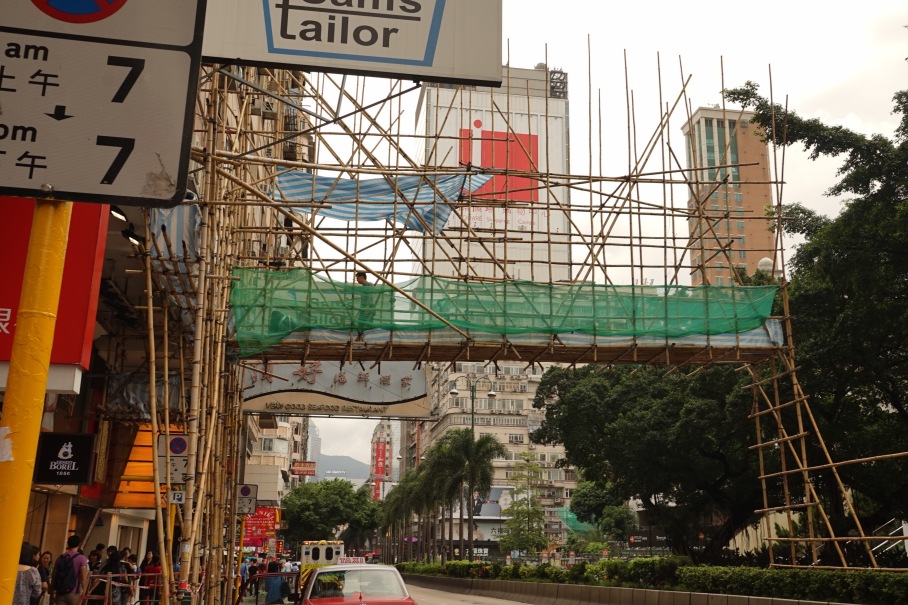 A closer look at the scaffolding 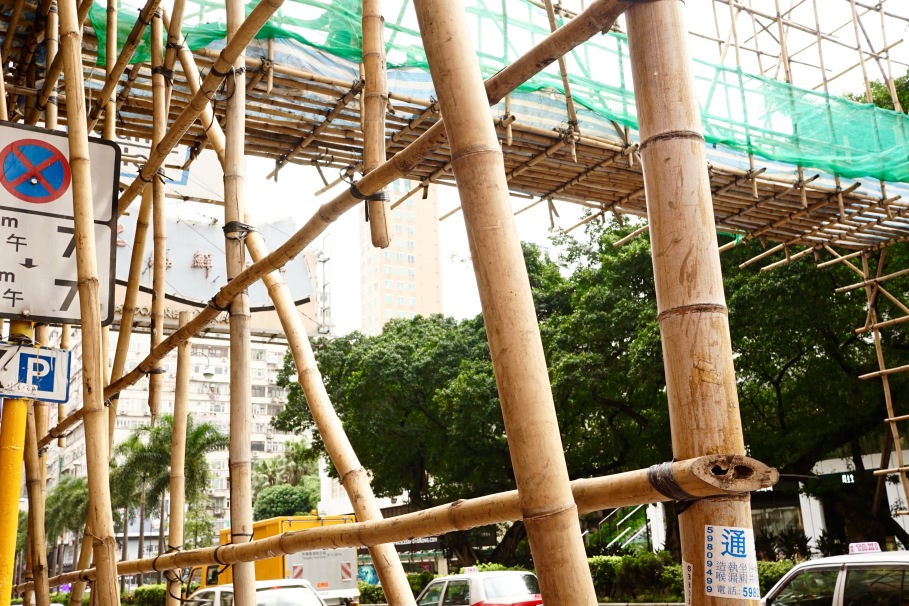 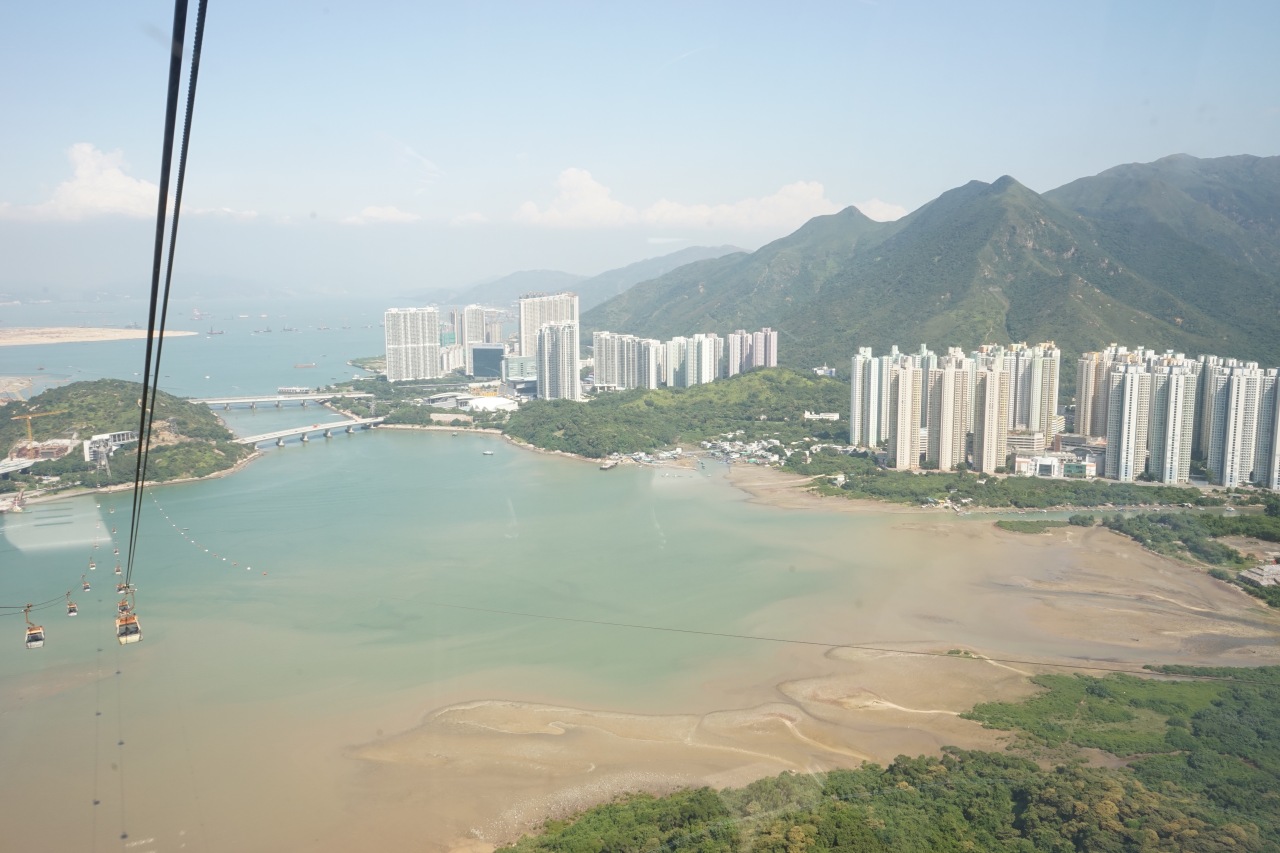 Little Jane, full of personality.  My new girlfriend, whom I met at breakfast. 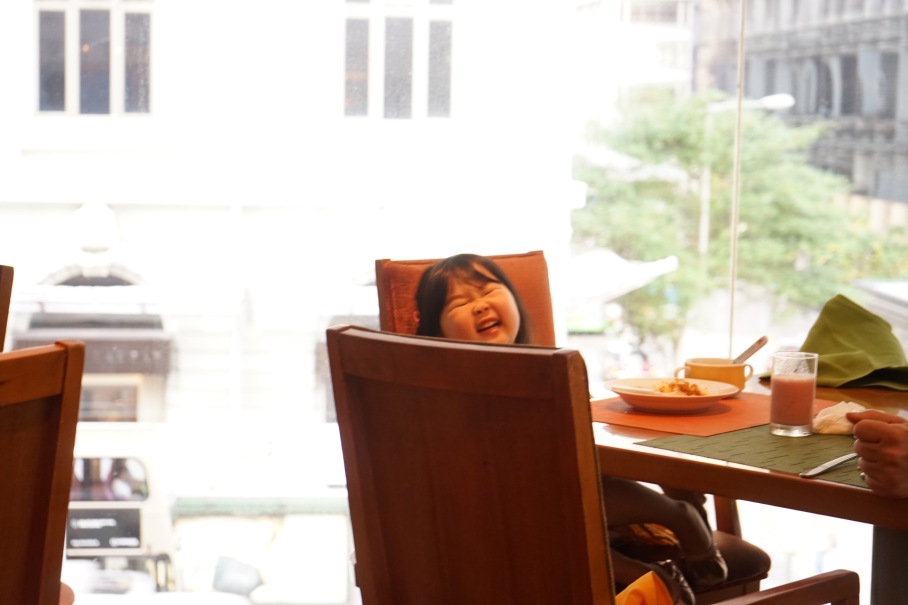 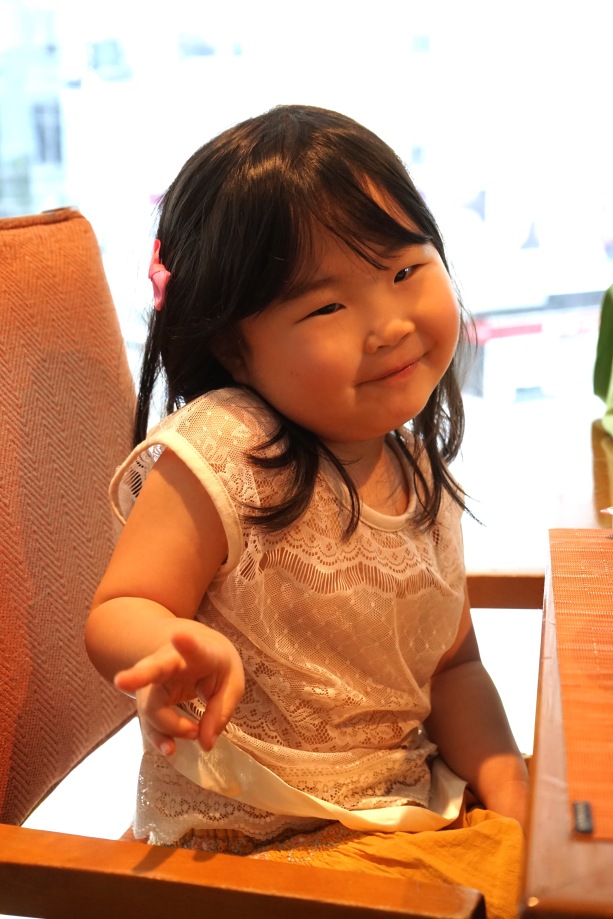 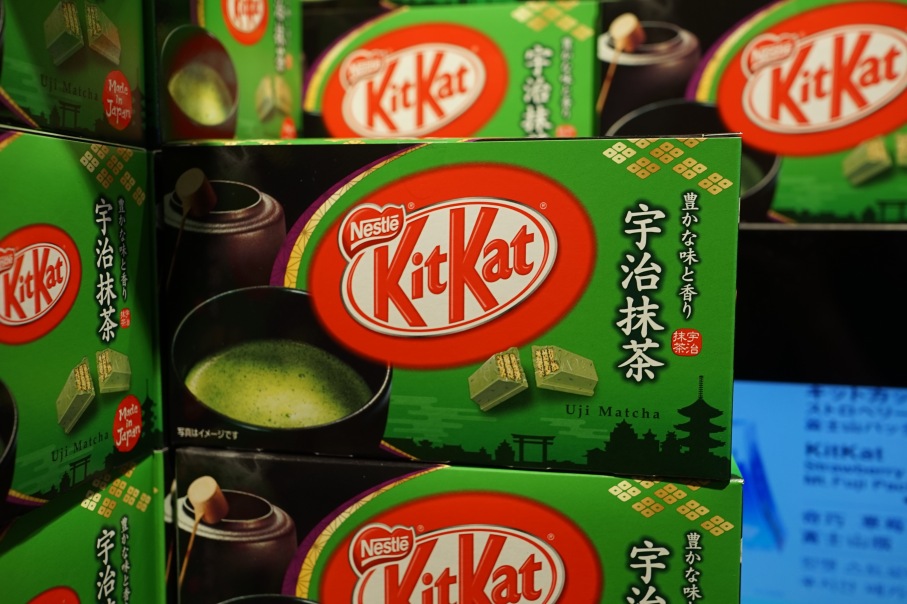 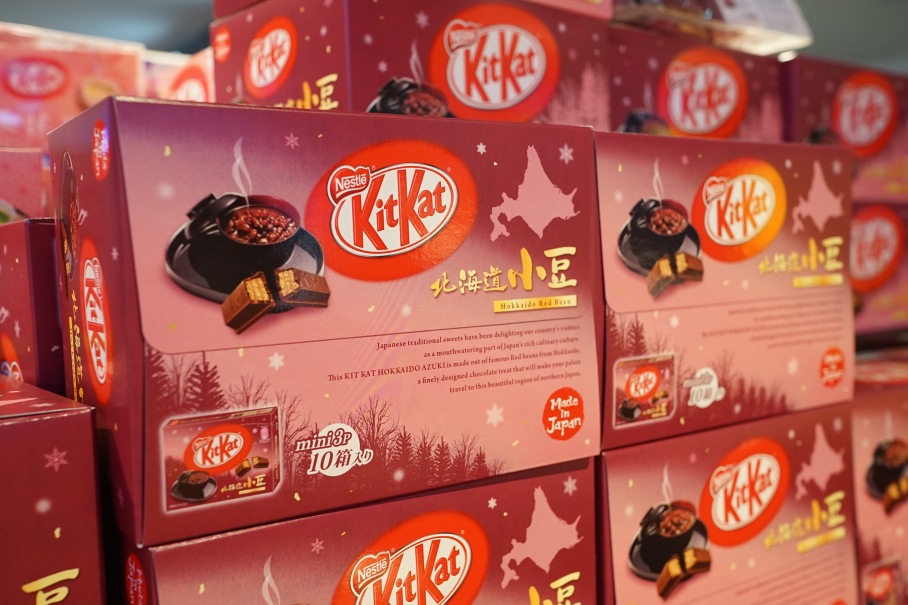 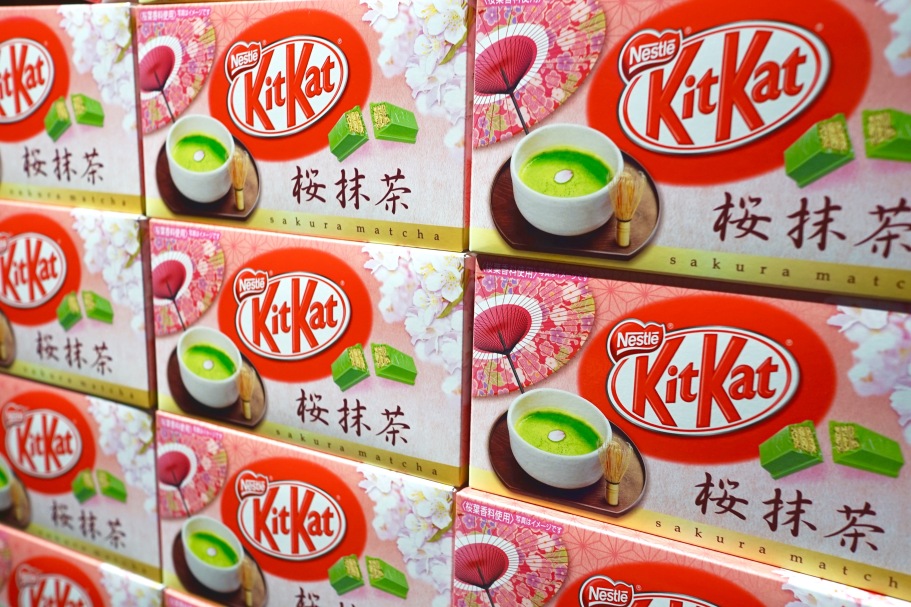 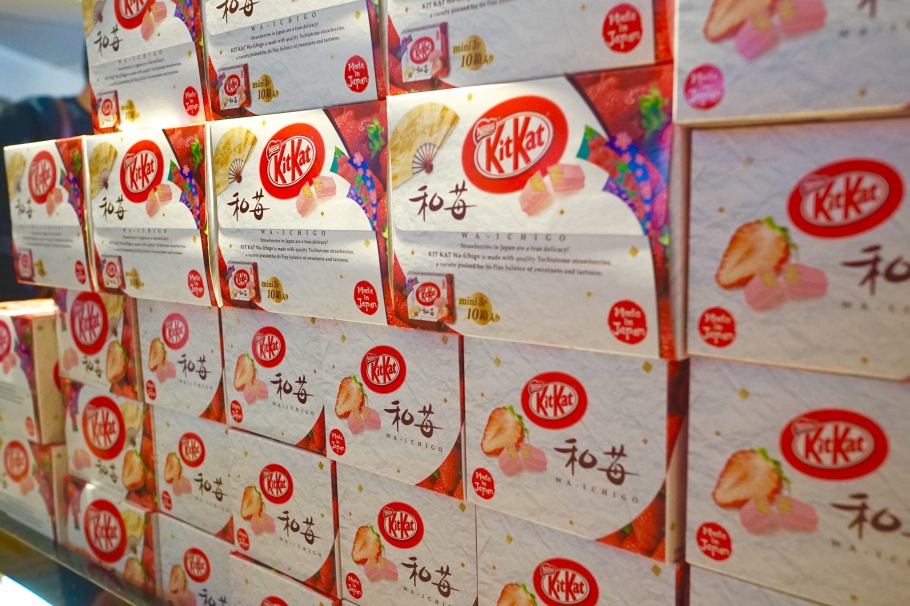 Clothing with American slogans and English writing were very popular.  Sometimes the words were misspelled or the letters were backwards.  Often the slogans were cutesy.  Have you ever known an American with a tattoo in Chinese?  The example below is what can happen when one cannot read the language they are wearing. 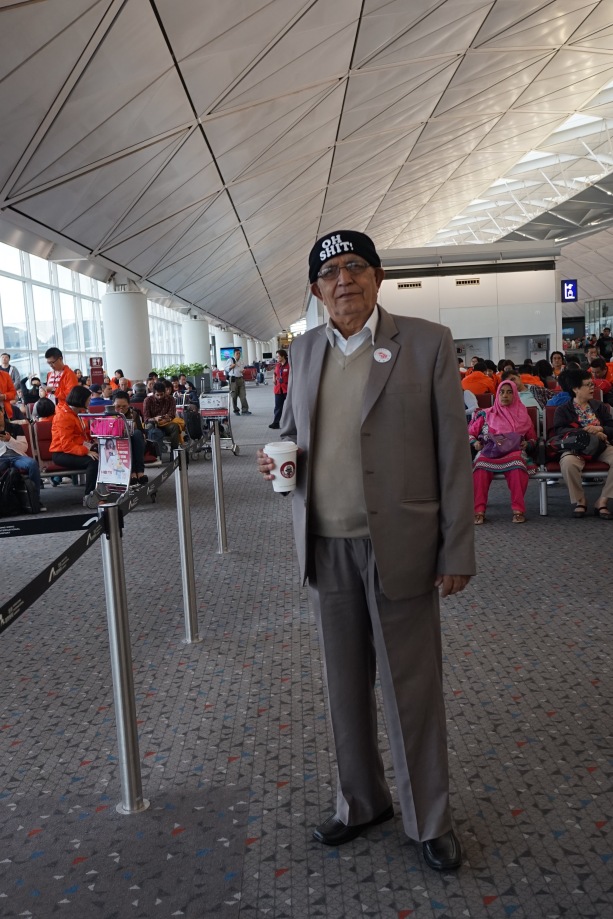 My International Scarf on the flight home.  I am truly stuck now until I receive professional intervention.😉 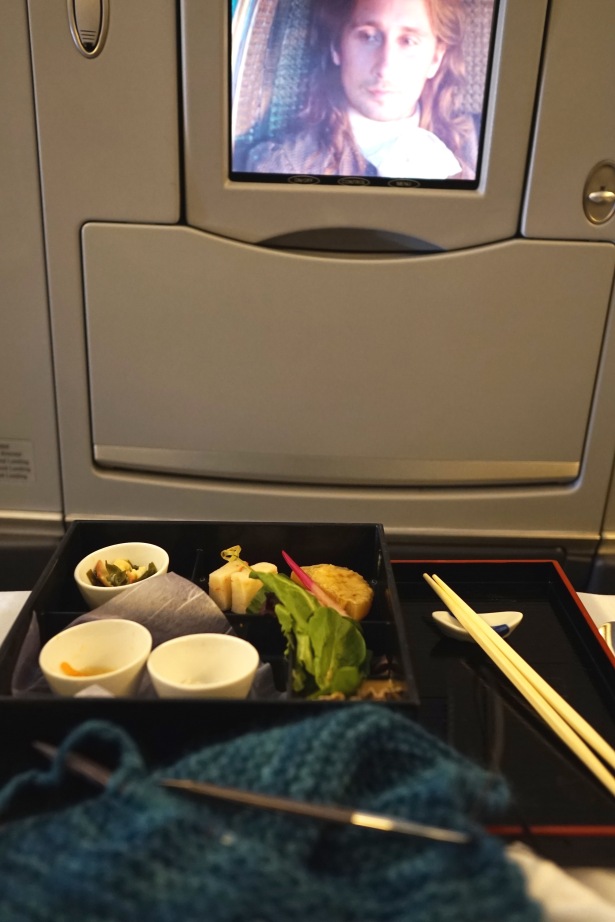 Have an adventuresome day!

23 thoughts on “Hong Kong Get Away”